Due to Ethiopia’s mountains, it lacks the famous megafauna found elsewhere in Africa, save for along the western and southern borders, which are far more difficult to access. The tradeoff for this is that the landscapes and views from the mountain parks are nothing short of spectacular (and the wildlife watching, while subdued, is nonetheless exceptional). Ethiopia does have tremendous biodiversity, including numerous endemic species, but much of it faces the same threats as elsewhere in the developing world, with habitat destruction, overpopulation, overgrazing, and pollution causing wildlife to retreat into protected or otherwise remote areas. Luckily for tourists like me, these areas have become much less remote as the government has made significant effort to pave roads and encourage development near the national parks to boost tourism, and numerous agencies manage transportation and handle the array of required permits, personnel, and equipment.

I visited two of Ethiopia’s national parks, and despite the historical and cultural wonders of the cities, I can safely say these were the highlights of the trip. My first, after Gondar, was the Simien Mountains National Park where I spent two days and one night hiking and camping. The Simien Mountains are considered Ethiopia’s Grand Canyon, and are deservedly famous both for their steep drop-offs and awe-inspiring views and for the local wildlife – gelada monkeys, walia ibex, and rare Ethiopian wolves. The park itself incorporates Ethiopia’s highest peak and mountain meadows used by local herders for grazing – unfortunately, this means the most common fauna are cows and sheep and there are significant erosion issues. Nonetheless, despite the altitude (most of the park is above 11,000 feet), the views from my campsite at Geech and from the peak of Imet Gogo the next day more than made up for the exercise of carrying my pack through the mountains (most treks include a mule to carry any baggage, my tour company apparently just pocketed that portion of the fees for the first day and let me use my own strength). And there was little difficulty seeing the park’s famous denizens – I passed multiple hundred strong packs of gelada monkeys just driving in, and more while on the trail. While returning to camp after sunset, our guide tracked down a unique noise to find an Ethiopian wolf, which we followed back toward the camp for some time – and then saw again the next day when it came around the camp garbage, only perhaps 100 yards from the tents. With only 500 individuals left in the world in a few sections of the Ethiopian highlands, seeing an Ethiopian wolf is a treat – but maybe not quite so rare, as they’ll come up again later in this post. Hiking in Ethiopia’s national parks is a change from elsewhere in the Western world, and not just for the landscape and wildlife. Both to provide sustainable employment to local people and to provide protection from the rare but still present leopards and hyenas (Ethiopian wolves are too small to pose much threat to humans), all trekkers are required to hire both a guide and an armed scout. I, however, did not get a guide for the first day and was left to wander around with a non-English-speaking scout and one other British traveler.

Getting directions from a local herder, Simien Mountains 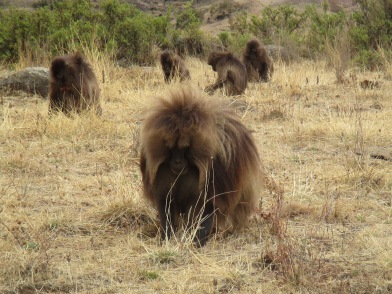 Looking north over the Simien Mountains, near Geech camp

My second trip was also up into the mountains, but this time in the south of Ethiopia in the Bale Mountains. The only part of my travels that went south of Addis Ababa, traveling to the Bale Mountains meant passing through the Oromo regions, luckily no longer restive. There are minimal physical differences between the Oromo and Amhara, however the Oromo language, which uses a Latin alphabet and is closely related to Somali, does clearly differ from Amharic, a descendant of the Ge’ez language. There is also a much larger Muslim population among the Oromo, especially as one moves further East, so minarets replaced many of the crosses I found elsewhere in the country.

The first stop on the way to the Bale Mountains was Lake Ziway, part of the Rift Valley that is a significant waterfowl habitat. While I stopped only briefly at the shore, I was surrounded by flocks of marabou storks, pelicans, and other birds that hang around to feast on the fishermen’s leftovers.

The Bale Mountains National Park encompasses a much broader range of terrain than the Simien Mountains, and despite similar altitudes is far more verdant. Here, the wildlife is the main draw over the scenery (though both are impressive) and as if they were set up for me, just after crossing the park border into the region known as the Gaysay Grassland there were so many antelope (mountain nyala, Bohor reedbuck, and Menelik’s bushbuck) and warthogs it was impossible to drive a few feet without seeing another one. This was replicated in the forested area around park headquarters, where the guide with me to track animals seemed superfluous given their ubiquity – besides the antelope and warthogs I was able to sight a colobus monkey, baboons, and a honey badger. The next day entailed driving up into the meadowlands of the Sanetti Plateau, the best place in the world to spot Ethiopian wolves. My luck at spotting these creatures continued, as I saw seven in my two trips across the plateau, some at close range, as well as many smaller rodents and several endemic birds. The wolves (as well as birds of prey) hunt the giant mole-rats whose burrows cover the landscape, easily viewable in the barren landscape when racing from den to den. The trip also took me above the clouds to the peak of Tulu Dimtu, the second highest peak in Ethiopia, and down into the Harenna Forest, where my weather luck ran out (I had been traveling towards the end of the dry season so rain was rare), and in conjunction with a miscommunication with the guide that resulted in me getting lost in the jungle, I was not able to find the local Bale monkey (or, if terrifically lucky, a lion). While I regretted not getting more of a chance to hike in the park, the ease of access to the most important sites by 4WD definitely allowed me to have a better wildlife-viewing experience. 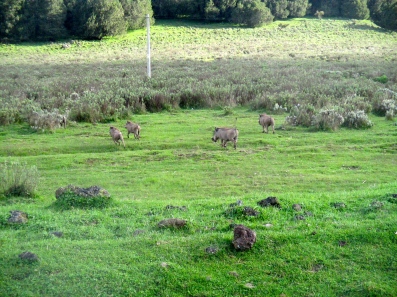 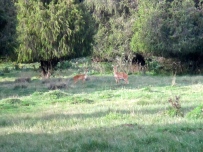 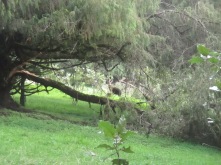 Both of these national parks, while still wildlife rich and popular with foreign tourists (though they were far from crowded at this time of year, I did not see a single visitor outside my group in the Simiens), show the challenges of maintaining large protected spaces in populated areas – in the Bale Mountains park rangers do a good job of keeping livestock out of the park, while in the Simiens there is less protection, but in both cases there are many communities within or just outside the park that rely on its resources for daily life and the parks must balance the tourism benefits of an undisturbed environment with the local demands for water, wood, and grazing land. Both parks also owe some of their upkeep to Western governments (Simiens to Austria, Bale Mountains to the EU/Oxford University). Indeed, throughout my travels in Ethiopia there were many signs of Western humanitarian involvement in Africa – local infrastructure projects bearing USAID or World Bank signs, posters urging local communities to stop migration to Europe, workers with medical charities trying to treat tropical diseases.

After the Bale Mountains, I headed back to Addis for one day to souvenir shop and relax before heading back to America with many great memories. Ethiopia is undoubtedly a challenging country – far too many of the inhabitants think of foreigners as walking piggy banks to beg or scam from, infrastructure and accommodations are certain lower quality than in the West, the cuisine can get monotonous, and political turmoil is always a risk. But I have never been anywhere like it, and its attractions are truly special, the sort of places that really are worth traveling halfway across the world to see.