Having seen Europe, Asia, North and South America on my travels so far, I started to consider taking my next trip to Africa, and Ethiopia was the first country that I started to study. As more travelers seek more adventurous destinations, Ethiopia has just barely started to feature on tourist itineraries, and with a great diversity of landscapes, wildlife, historical sites, and ethnic groups, Ethiopia seemed a wonderful place to get a first taste of the continent (the fact that it has direct flights from DC also helped). I spent two weeks traveling solo in Ethiopia, jumping between a half-dozen cities and parks to cover most of the country’s highlights.

As some background to keep track of the differences and importance of the various cities and sites I visited, here’s a brief history. Unlike most African countries, the results of modern European meddling, Ethiopia has an ancient history – it is referenced in Egyptian hieroglyphs and in the Bible, developed major civilizations as early as 1500 BC, was the world’s second nation to adopt Christianity as the state religion, and likely formed the basis for the European legends of the kingdom of Prester John. Ethiopia’s defeat of Italian would-be colonizers is a defining feature of national identity. Yet despite this history, Ethiopia today is not a unified country, and is divided into a multitude of different ethnic groups, predominantly the Oromo, Amhara, Tigray, and Somali, each of which inhabit their own region of the country – I visited all except for the Somali region, which is discouraged by the State Department due to ongoing intertribal and anti-government violence. Dissatisfaction between the Oromo and Amhara, which comprise the majority of the population, and the Tigray-dominated government led to major violent protests around the country in the two years prior to my visit. Approximately one month before I arrived, the long-time prime minister was replaced with an Oromo, leading to increased optimism in the political direction of the country. Nonetheless, surging population growth and a still largely agricultural lifestyle in much of the country pose a significant challenge to any leadership seeking to integrate the masses of underemployed young people into a modern nation.

I began my trip, as most foreigners must, in the capital Addis Ababa. While no particular tourist destination itself, Addis perfectly encapsulates the changing nature of today’s Ethiopia. Flush with Chinese-built infrastructure, high-rise hotels and office buildings, diverse dining and entertainment options to suit a burgeoning middle class (and the army of foreign diplomats and NGO workers who pass through the city), Addis’ wealth has drawn in millions of people from other parts of the country, most of whom have not found the high-paying jobs they desired. As a result, much of the city consists of hastily constructed slum neighborhoods hidden behind the main streets, while the haphazard growth of even the more modern sections of town has caused major problems with congestion and pollution across the city.

Addis Ababa from above 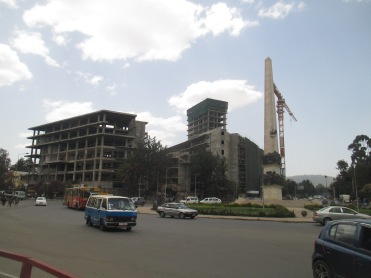 Founded only at the end of the 19th century, Addis has relatively few historical sites, though it does host Ethiopia’s main museums – while admittedly shabbier than their Western counterparts, the National Museum of Ethiopia and Ethnological Museum host some important artifacts, such as the cast of the skeleton of “Lucy”, the most famous early human specimen, while the Red Terror Martyrs Memorial Museum shines a powerful light on some of the horrific, if little-known violence of late 20th century Ethiopia under Communist rule. 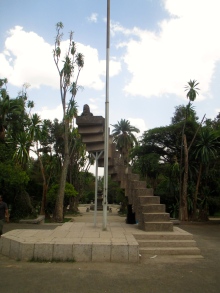 Chiefly, however, for those who are not in Ethiopia for business or government purposes, Addis serves as a gateway to the more spectacular outlying regions of Ethiopia, thanks to the high-quality intercity service offered by Ethiopian Airlines, Africa’s premier carrier (which offers half-off domestic flight prices to people who book on its international routes). My trip, largely following the traditional northern circuit route, focused on these cities and parks, starting with the city of Bahir Dar.

Bahir Dar, the capital of the Amhara region, is located on the shore of Lake Tana (Ethiopia’s biggest lake) and the source of the Blue Nile river (one of the two headwaters of the Nile), and has developed into a domestic tourist destination for Ethiopians thanks to its picturesque scenery. Its palm-lined main boulevard is far more reminiscent of the Caribbean than anywhere else in landlocked, arid, Ethiopia; though unfortunately this attractiveness does not extend past the first block from the lake. 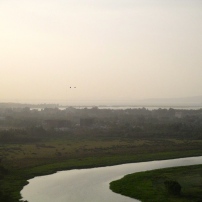 Monument to Amhara victims of the civil war, Bahir Dar 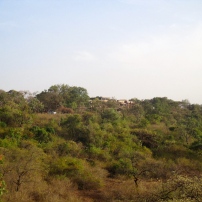 While the city is comfortable enough, Bahir Dar’s main attractions are located along its waterways. Due to earlier periods of religious strife, many of Ethiopia’s Christian monks established communities on the islands and peninsulas around Lake Tana, decorating these monasteries (which on the outside are simple and very African-looking with their round, thatched churches) with beautiful depictions of biblical scenes, including unique local stories included solely in the Ethiopian Bible or related texts. The source of the Blue Nile on Lake Tana also is a great site for wildlife viewing, adding an extra bonus to a boat trip to the lake monasteries (I visited only two, Ura Kidane Meret and Azuwa Maryam on the Zege Peninsula, though per the guidebooks differences between the dozen-odd monasteries on the lake are rather minor).

Traditional canoes on an island in Lake Tana 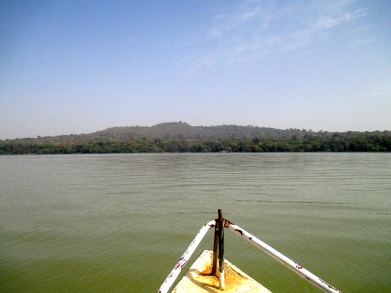 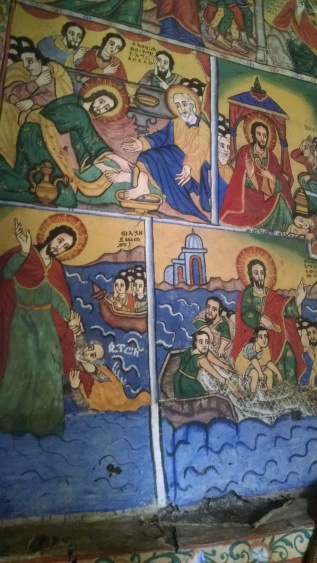 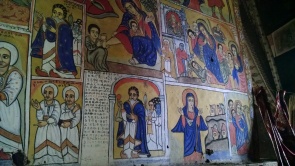 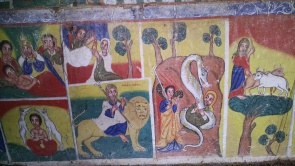 In the other direction from the city, the Blue Nile has an impressive waterfall, though at the time of my visit it was shrunken heavily due to the dry season (which lasts from around October-April), as well as dams built upstream. Though not far from the city, the trip to the falls provided a fascinating glimpse of Ethiopian rural life, as most of the country’s population is still engaged in agriculture and lives in small villages like those I passed through, where the dirt roads are used for livestock instead of vehicles, traditional clothing is still regularly worn, and school is secondary to helping in the fields, even for 5-6 year old children. 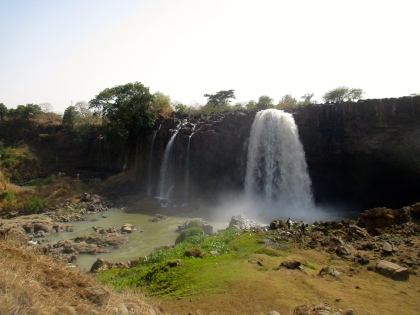 A very crowded and uncomfortable local minibus ride took me next to Gondar, another Amhara city even higher in the mountains, and the seat of Ethiopian power in the seventeenth and eighteenth centuries, most prominently under Emperor Fasilides. The presence of the emperor’s court in Gondar endowed the city with a profusion of castles and other historic architecture, most well preserved in the Royal Enclosure despite destruction from later wars and the general decline of the city’s importance after 1850 – Gondar is sometimes called the “Camelot of Africa” for its medieval appearance, though its crumbling palaces show far more signs of Indian and Middle Eastern influence than European. Still walled off from the rest of the city, wandering through the mostly-deserted grounds of the Royal Enclosure is strangely peaceful, with the lost opulence of the ancient emperors a stark contrast to the poverty and bustle of the modern city. While most of the rest of Gondar today is similar to any other Ethiopian city, a few historic sites are scattered elsewhere in the city, such as the Debre Berhan Selassie Church, allegedly saved from a marauding army by a miraculous swarm of bees. While leaving the city, I got an experience of Ethiopian’s approach to the new leadership, far different than the emperors of yore – a visit from the new prime minister drew thousands of marchers to welcome him to the city, waving the flags of Ethiopia and the Amhara region and posters of his face – clearly, despite the lack of democratic participation in his rise to power, the local people have great expectations for a more inclusive government under his direction. As an interesting side note, according to one would-be guide, many of Washington DC’s large Ethiopian population hail originally from Gondar. 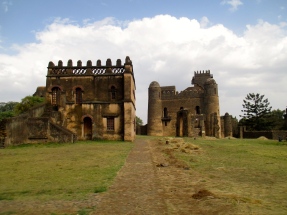 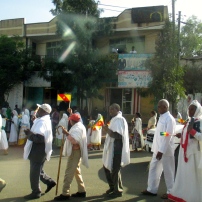 Next I go back in time to even older capitals of Ethiopia in Lalibela and Aksum, but that’s for another blog.